My most recent posts 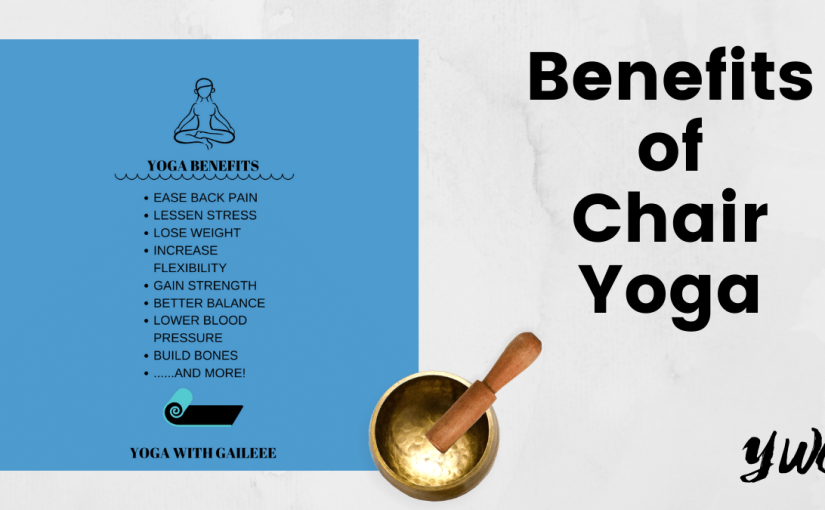 Chair Yoga practices for you.

Similar to a mat yoga practice, chair yoga can help you to discover how to: #BuildBones #IncreaseStrength #BeLessStiff #EaseBackPain #LowerBloodPressure #GainFlexibility #BetterJointMobility #ImproveCirculation and more! Come do these Youtube Videos and arrange for a private one on one or small group class! Yoga With Gail. 409-727-3177

The study, published June 8 in the journal Neurology, found that yoga is as good as a traditional aerobic exercise program in improving measures of fatigue, a common and potentially disabling symptom of MS. It was the first randomized, controlled trial of yoga in people with MS.

A parallel study by the same OHSU authors, presented in April at the 56th annual meeting of the American Academy of Neurology, found that cognitive function does not improve among healthy seniors in a six-month yoga program or exercise class, but physical health and quality of life appear to be enhanced.

The MS study was not designed to determine the impact of yoga on the disease itself, said the study’s lead author, Barry Oken, M.D., professor of neurology and behavioral neuroscience in the OHSU School of Medicine. Rather, it was intended to determine the effect of yoga and aerobic exercise on cognitive function, fatigue, mood and quality of life among people with MS.

“There are some claims out there that yoga helps MS itself, that it can decrease the number of lesions” in the brain caused by MS, said Oken, director of the Oregon Center for Complementary and Alternative Medicine in Neurological Disorders (ORCCAMIND) at OHSU. “I’m not sure that that’s not the case, because stress may have an impact on MS. But that was not what we were trying to show.”

Study co-author Dennis Bourdette, M.D., professor of neurology in the OHSU School of Medicine and director of the Multiple Sclerosis Center of Oregon, said yoga was studied because many people with MS already are using it and reporting benefits.

“We wanted to see whether or not it was beneficial when studied scientifically and how it compared with a type of exercise that physicians are more comfortable recommending — exercise on a stationary bicycle supervised by a physical therapist,” said Bourdette, chairman of the School of Medicine’s Department of Neurology and associate director of ORCCAMIND.

An earlier survey of nearly 2,000 MS patients in Oregon and southwest Washington found about 30 percent of respondents tried yoga. Of those, 57 percent reported it to be “very beneficial,” Bourdette noted. Indeed, many chapters of the National MS Society sponsor yoga programs.

“So it is used fairly commonly, and I believe with the publication of our results it will gain even more acceptance and use,” he said. The study “also clearly demonstrates that yoga postures can be modified for use among people with MS who have disabilities caused by their condition and that yoga can be done safely and effectively.”

The study examined 69 MS patients in three groups: one taking weekly Iyengar yoga classes along with home practice; another taking a weekly exercise class using a stationary bicycle along with home exercise; and a third group placed on a waiting list to serve as a control. Participants were monitored for attention, alertness, mood, anxiety, fatigue and overall quality of life.

The yoga classes were offered once a week for 90 minutes. Participants were taught up to 19 poses, each held for 10 seconds to 30 seconds with rest periods of 30 seconds to a minute. They also performed breathing exercises to promote concentration and relaxation, as well as progressive relaxation, visualization, and meditation techniques. And the daily home practice was strongly encouraged.

The MS study’s aerobic exercise component was similar to the yoga intervention, with one class per week plus home exercise. It consisted of bicycling on recumbent or dual-action stationary bicycles, and each class began and ended with about five minutes of stretching. Participants were given exercise bikes to use at home and were encouraged to use them outside of the weekly class.

While the yoga and aerobic exercise programs produced no significant changes in alertness, attention or other measures of cognitive function in MS patients compared with the waiting-list group, the study found there were improvements in two fatigue measurement tests.

“We think they’re equally beneficial for symptoms of fatigue from MS,” Oken said of yoga and aerobic exercise.

The study cautioned that the reasons behind the reduction in MS fatigue symptoms are unclear. The socialization aspect of the yoga and exercise classes, as well as a placebo effect — simply telling participants that the exercise program was specifically designed to improve psychological well-being — could be credited.

Yoga is a type of so-called mind-body medicine that includes tai-chi, meditation, and dance, music, and art therapy. It is a commonly practiced method involving behavioral, psychological, social and spiritual approaches to health, and it is centered around meditation, breathing, and postures.

Of the active or hatha yoga techniques, Iyengar yoga is the most common type practiced in the United States. Participants assume a series of stationary positions that employ isometric contraction and relaxation of different muscle groups to create specific body alignments. There also is a relaxation component.

“I see it mostly as a kind of physical activity with a stress-reduction component and body awareness features,” Oken said of yoga. “It has this aspect of bringing your attention to the present moment. But it’s hard to know if that’s due to relaxation or getting your mind not to worry for a little bit.”

Whatever the workout method, exercise seems to help MS patients reduce fatigue symptoms, Bourdette said.
“This is true whether the regular exercise is yoga, swimming, using a stationary bicycle or any other physical activity,” he said. “Sometimes the effects are quite dramatic and other times less so. But everyone with MS who exercises regularly reports benefit.”

The parallel study on the effects of yoga and exercise on healthy seniors focused on 136 participants aged 65 to 85. It showed there were some improvements in physical measures, such as cardiovascular fitness, and quality-of-life measures, such as energy and fatigue.

There was no improvement in measures of cognitive function, however, compared with a waiting-list control group.

“I was hoping to show some cognitive benefit, but the main benefit was a decrease in fatigue and higher energy levels,” Oken explained. “I think those relative benefits are only going to be seen over quite a long period of time. In healthy people, it’s probably going to be a fairly subtle effect.”

Both studies were funded by the National Institutes of Health.

Here’s a link to my Yoga Nidra that I posted on SoundCloud.  Enjoy!

Adaptive Yoga for those with
Multiple Sclerosis

Instructor Gail Pickens-Barger is a member of the International Association of Yoga Therapists and the Yoga Alliance, and is sponsored by the National Multiple Sclerosis Society.

She is certified at the 200-hour & 500-hour experience registered yoga teacher level and specializes in Adaptive Yoga for Multiple Sclerosis.
For more information, contact Gail Pickens-Barger at 409-727-3177

Here’s the link to my yoga nidra I recently posted on SoundCloud.  About 15 minutes.  Enjoy!

National Sleep Foundation 2003 Sleep in America Study found that about half of the senior citizen population reports some type of sleep problem such as waking to go to the bathroom and not being able to get back to sleep. Sleep problems in the elderly are correlated with stress, medical conditions, excess weight or fatigue. The study indicates that many of these problems go untreated.

There is a positive correlation between sleep and fitness. About half of older adults do some kind of fitness activity during the week. Simple stretching and yoga relaxation exercises can enhance mental and physical relaxation and improve the quality of your sleep.

Yoga Poses:
There are a variety of yoga poses done before bed that may be helpful. They can be adapted to use in a chair. These include: legs up the wall or on a chair (laying on the floor with legs resting on a chair); seated forward bend (seated leaning forward on another chair or table) and sitting in easy pose, cross-legged with back against wall.

Deep Breathing:
Use deep breathing to relax and unwind from a busy day. Breathe deeply and evenly through both nostrils. Inhale for 4 counts, exhale for 4 counts for several complete breaths. Then inhale for 3 counts and exhale for 6 counts. Repeat several times. Increase the length of the exhaled breath as you are able. Only do what is comfortable for you.

Relaxation:
Use progressive relaxation in any one of its many variations to relax the body. For example, begin by focusing on your feet as you inhale and exhale slowly. Focus on relaxing your toes, ankles, heels, calves etc. with each exhale. Some people like to tighten muscles and then relax them as they exhale. As you relax, feel all the tension drain from the part of the body on which you are focusing. Continue throughout your body, relaxing each part as you exhale. In addition, you can focus on your breath as you inhale and exhale or think of a special word and repeat that word as you inhale and exhale. Visualize a favorite place and go there in your mind. Find a progression that works for you and practice it. When you have problems sleeping use the progressive relaxation you have practiced.

Take a little time to unwind before you go to sleep. Don’t keep working until you hit the mattress.

Be kind to yourself. Sleep cannot be forced, it can be coaxed. The world can spin without you for a while. Enjoy this moment. 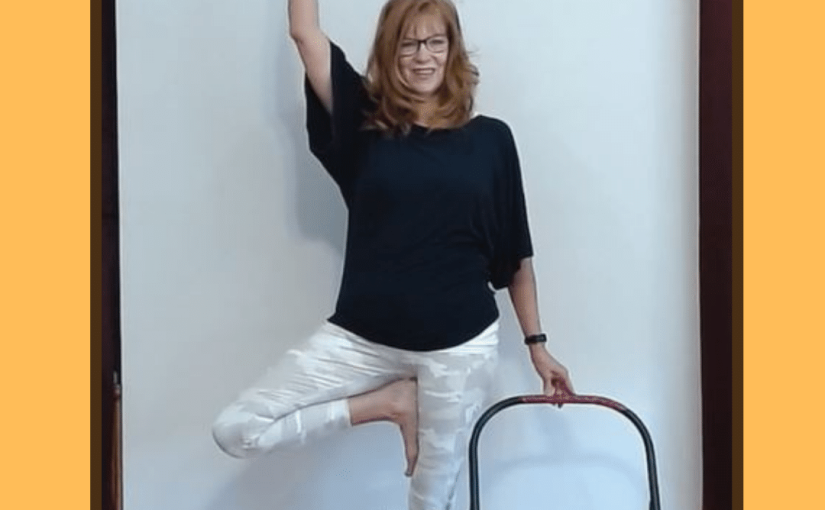 Ease Back Pain – The Secret? It’s Yoga, even Chair Yoga!

Call me 409-727-3177 to schedule your private chair yoga class to start you down the path to better health. Gail Pickens-Barger, Experienced Yoga Teacher, over 20 years of teaching experience.